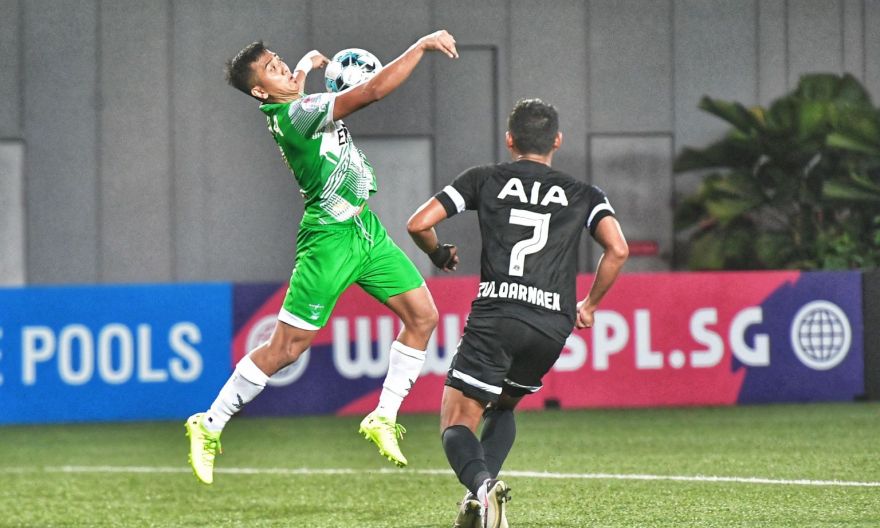 It drew the Eagles level to 1-1 and while they would eventually lose 3-2 to the Young Lions at Our Tampines Hub, the milestone was still meaningful for Amy. It was the first time he reached double digits in his 11 seasons of professional football.

The 29-year-old is also the first local-born player to reach 10 goals this term. He later told The Straits Times: "It's mixed feelings because I would rather we have the three points.

"But I'm happy to contribute to the team with my goals. Other than my own hard work, it is really down to coach Noor Ali's guidance, my wife and team-mates' support and the chemistry with players such as Barry Maguire, Matheus Moresche and Christopher van Huizen.

"It's all down to the small details - the coach's pep talk, Barry's guidance about positioning, and even the mini wagers with the forwards when the loser in shooting drills buys coffee for the rest."

On the pitch, Amy has taken to Geylang coach Noor Ali's pressing philosophy, and off it, he has made the extra effort to buy gym equipment such as weights and treadmill to build his upper body strength and stamina.

Noor Ali said: "I have seen him grow from the Geylang youth team, and he has never stopped working hard. He had been unlucky with injuries but he has built himself up again. The main difference this season is he has been more composed and clinical."

Amy's previous best was six goals in 2019. His performances have also impressed national coach Tatsuma Yoshida, who has called up the fleet-footed attacker for national team training this coming week.

"I hope to be able to continue this form, win my first cap, make the Suzuki Cup squad and make my family proud," said the former national youth footballer.

His strike was part of a dramatic match in which the Young Lions opened the scoring through Jacob Mahler's fourth-minute penalty, fall behind after Moresche also notched his 10th of the season from Amy's assist in the 57th minute, and then won the match with two late goals from Ilhan Fandi.

Young Lions midfielder Ryhan Stewart almost sparked a fracas as he goaded the home fans, and was shown a yellow card after the match.

The national Under-22 team remain bottom of the SPL with 13 points from 17 games. But they trail Balestier Khalsa, who lost 4-0 to league leaders Albirex Niigata at Jurong East, on just goal difference, while the Eagles are sixth on 16 points.

Despite the disappointment after the defeat, Noor Ali saw bigger-picture positives in terms of attacking prospects for the national team as Amy and Ilhan, who has six goals this season and has taken less than 30 SPL games to reach the 10-goal mark, stood out in the match.

Noor said: "It's good to have a variety of attacking options which we lacked in the past few years. Amy fully deserved his national call-up and would deserve to get a run of international matches to show what he can do alongside senior attackers like Gabriel Quak, Faris Ramli and Hafiz Nor.

"Then, there are the younger attackers like Ilhan and Ikhsan (Fandi). Both are strong and good in the air, Ikhsan is a targetman, while Ilhan can play as a No. 9 or No. 10 with his high mobility and awareness. It would be interesting to see how they develop and gel for the national team."