His Family Lost Their Home. Then, Her 'Special Numbers' Delivered 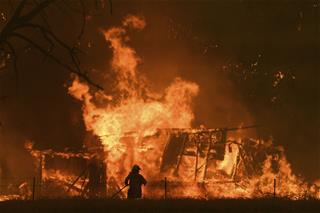 (Newser) – Enormous tragedy followed by enormous good fortune: A Queensland man who lost his family home in New South Wales in Australia's devastating bushfires will be able to rebuild it with funds from the lottery he just won. The man, who doesn't want to be identified, won a million Australian dollars (about $685,000 USD) in Wednesday's Gold Lotto draw, the Brisbane Times reports. "This is a miracle," the lotto winner says in a press release. "My family just lost their home in the bushfires in northern New South Wales and it wasn't insured, so thank you very much."

The man, who played his wife's "special numbers" for the winning draw, adds, "This really has come at the most incredible time. All that was left of the home was a few charred teacups. We didn't know if we would ever be able to rebuild, but now we definitely can." (Read more Australia stories.)