How we stay together: 'Love at first sight is a thing'

HOCKHUA 30-year anniversary promotion
Need urgent deliveries? We can do it in 1 hr! 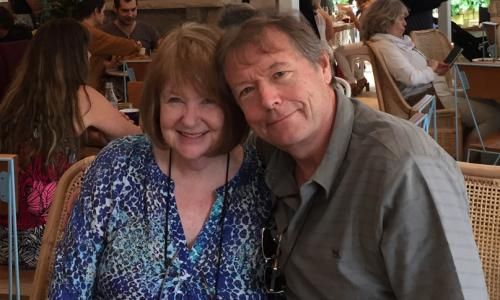 If Kandy Shepherd and James Carpenter’s relationship was a romance novel, it would be a short one. Three days after the editor-turned-romance-novelist met the businessman, they decided to spend their lives together.

And they have. “We’ve been together 31 years,” says Shepherd. “ Ten months after we met each other, we got married.”

On the day we meet, the couple are surrounded by boxes scattered around their Sydney home. They’re about to move to their Blue Mountains farm for good. Yet it all began with another move.

Related: Relationships: tell us how you stay together

In 1988, a close friend of Shepherd’s was searching for a flatmate. Carpenter, who’d been working in Canberra, was transferred to Sydney and looking for somewhere to live. He turned up on her doorstep and, Shepherd says, her friend took one look at him and thought “He’s for Kandy.” “I was oblivious of course,” says Carpenter.

The couple met at a party a few weeks later and the flatmate was proved right. Shepherd remembers thinking not only that he was handsome but that she liked him as a person. “If he was married and I was married ... I would have liked him as a friend. We just got on well.” He was similarly captivated by Shepherd, who was the editor of Family Circle at the time.

Both had been married previously, with Carpenter recently divorced. While he hadn’t planned on getting involved with anyone so soon after arriving in Sydney, he was drawn to Shepherd. “I did trust my instincts, trust my judgment and ...It wasn’t taking a risk really. I just thought I like that lady.”

You should be looking roughly at about 85%. There’s going to be 15% there that you mightn’t like but can you manage it?

The following night they went on “a very lovely formal date” to see the film Good Morning Vietnam, with Carpenter bringing Belgian chocolates along as a gift. After the movie, they went to a cafe and ended up staying until 2am. “[The staff] were looking at us and [piling up] all the chairs all around us and we were totally oblivious,” says Carpenter.

They were “full on from the word go” – but trusting each other was crucial. Carpenter had a classified government job that meant he often had to “disappear”. He says: “I would say to Kandy, I’m off. I can’t tell you what I’m doing, where I’m going, how long I’ll be. I can’t get in touch but I have to go. So she had to trust me to do that. And then I’d just reappear and that was it.” Shepherd understood it was part of the package. “He told me about his job, [he said] you need to know this if we’re going to spend our lives together. And we thought, ‘Yes we are going to spend our lives together!’”

Related: How we stay together: 'Negotiate every day, resolve and move on'

Six weeks after that first date, he moved into her apartment – and paid off her mortgage. “I said we’ll need to transfer into both our names then and that’s going to cost stamp duty [so] let’s do that. And he said, ‘No, no. I trust you.’”

Building a home together was something they had in common – and still do, having renovated a number of properties over the years. They both love animals, the outdoors and are both Anglophiles. But in many ways they are very different, says Carpenter. “As people, we’re virtually 180 [degrees] in a lot of respects. I’m more introverted, Kandy’s more extroverted. She’s the ‘pshhhu’ and I’m the slow burner ... I’m the sporty one, she’s not. She’s happier looking at her book. So we’re vastly different people but we have worked it out.”

They both believe in doing their own thing. “We do do things together but we also have always had separate lives,” says Carpenter. She’ll often go overseas to romance-writer conferences, while he’s gone cycling around the world. “You trust them to go off on their own. And I also think when you do have separate interests you bring something new into the relationship, which keeps it fresh.”

A few years into their marriage, they moved to London where their daughter Lucy was born. It did change the relationship. Where they’d been “fairly freewheeling”, now they had to get serious. “It made us a lot more focused because there were time pressures, there was a financial [aspect], we had to do all those sorts of things. So it made us a lot more disciplined and organised,” says Carpenter.

There was never any doubt that they’d share the load. Says Shepherd: “One thing that really annoys me is when people say, ‘Oh he helps me with the housework.’ I think, he helps? Isn’t it both of us? We’re both doing it.”

This continued when they moved back to Sydney and both held down demanding jobs. At one stage Shepherd was commuting to Melbourne four days a week as the editor of a major magazine. It was a tricky juggle with a five-year-old. Shepherd laughs again. “People say ‘but how could you trust James to look after her?’ And I say, ‘What? He’s her father. There’s nothing he can’t do that I can do.’”

Related: How we stay together: 'You don’t have to make the other person be just like you'

After many years in publishing, Shepherd decided to write full-time. Her husband, who at this stage ran his own recruitment company, was supportive. “[I said] we don’t need your corporate job anymore. You’ve given me time to get established, we’re established, we’re doing well. Give it up. Go and do the thing that you love now. I will support us.”

Living with a full-time writer has its challenges, and it’s something they’ve come to terms with in recent years. “I just like me and my thoughts and getting in the zone. And I don’t want anyone interrupting me. So James gives me the space to do that, he’ll go out to the farm or have me go out there and say OK, you’ve got the whole week to yourself.”

Shepherd has written a number of successful romance novels including Love is a Four-Legged Word, The Castaway Brideand the Sydney Brides trilogy. She says while the books are intensely romantic, she likes to make sure they have some depth. “Love at first sight is a thing ... An intense attraction and inevitability. Like how we did.” But when she writes, the characters have to be grounded, they need “shared values because by the time the reader comes to the end of it, you want to think, well it isn’t just ending with a wedding. It’s going to continue on because they’ve got that basic respect for each other.”

Readers who meet her at conferences and elsewhere often ask her for advice: “Some people ask me [what I think]. I say, if you have to ask me should I marry him, I don’t think you should! I think you should know you want to marry him.”

Carpenter thinks carefully about the advice he’s given his daughter. Apart from trusting her instincts, he says he believes you shouldn’t try to change people. “I do certainly remember saying this to Lucy, you should be looking roughly at about 85%. There’s going to be 15% there that you mightn’t like but can you manage it? Can you live with it? Don’t try and change it, it’s the way that the person is.”

Related: How we stay together: trust, boundary setting and pushed comfort zones

And when it comes down to how they’ve stayed together over the years, they believe it comes down to trust, kindness and having each other’s back. “You don’t have to watch your backdoor,” says Carpenter. “Life is hard enough with what you’re faced with, what you need to do. Just all these challenges out there without worrying about your backdoor, that your wife’s going off with somebody or your husband’s going off. You’ve got that secure.”

Shepherd agrees: “To have compassion for each other and for home to be a haven for people. That you’re kind to each other and that you actually want to help make life a bit easier for the other person.”

• We want to hear your stories about staying together. Tell us about you, your partner and your relationship by filling in the form here