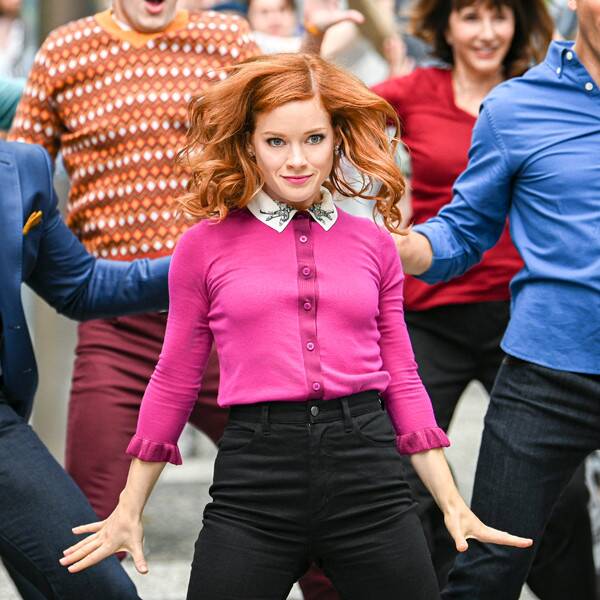 It's not every day that a TV show reaches 100 musical numbers.

That's mostly because most TV shows don't have musical numbers, but also because it takes it takes a lot of work to get to a milestone like that in less than two seasons. This Sunday, Zoey's Extraordinary Playlist will have done it, and it's a cause for celebration.

The NBC dramedy will surpass 100 in the episode, "Zoey's Extraordinary Mystery," in which Zoey (Jane Levy) finds that her musical powers are all messed up. Instead of hearing people expressing their own feelings through song, she finds that they're expressing other people's feelings. The heart songs are all a mess, and she's got to figure out whose song is whose. It results in some truly incredible performances, not unlike the incredible performances the show has given us in every episode so far.

In honor of reaching 100 songs, we got the cast of the show to share their favorite songs so far. Or rather, we got most of the cast to do that. We made Zoey herself do a little bit of extra work, as you'll see below.

One of the questions we asked Levy was what song has gotten the most stuck in her head, and the answer, aside from "Sucker," was "all of them." So maybe, after 100 songs, you'd think Levy might have figured out the trick to getting a song out of her head. She sort of has.

"Sing another song," she advises. "It's like when people say you're never gonna get over your ex until you date someone new."

We can't tell whether that's great or terribly useless advice, but we'll take it either way!

Scroll down to get some great teases from Jane and to find out which songs the cast picked!

"My favorite number would have to be 'Tightrope.' Just to see utter Black joy and a group of extremely talented people of color was a true highlight for me!"

"One of my favorite musical numbers is one we that just did just this past week. It's 'Into You,' by Ariana Grande. The concept by [choreographer Mandy Moore] and the team and [creator Austin Winsberg] of not touching, but expressing intimacy and building that with Jane was just wonderful. And also tantric in this really beautiful way. That's what's freshest on my mind right now. I'm so excited and happy and privileged to get to work with team dance: [choreographers] Mandy, Jillian Meyers, Jeff Mortensen. None of this would be possible without them."

"My favorite musical numbers from the series so far have been 'American Pie' and, for me personally, 'A Moment Like This.' Being with the entire company in 'American Pie,' performing in a seamless way, felt more like a tone piece than a musical number. 'A Moment Like This' was important to me because it was the culmination of a big sequence that had both comedy and heart, but then to bring it home with emotion in Zoey's first duet felt very special."

"My favorite numbers have both occurred in the two finale episodes for season one and two. I loved 'American Pie' because it was a perfect example of people working in both grace and precision and it only worked if each of us did our parts perfectly. I love a dance in the second season finale (can't say what it is) because it was difficult but SO much fun and John Clarence Stewart and Skylar Astin and I had a moment where our eyes would always meet and we would almost burst into laughter with the joy of doing that dance."

"My favorite number is 'Kiss Me' because that song was the jam when it first came out and we got to do ballroom with Mandy, which was challenging but so fun. It was very sweet and I love a group number that's all in one shot!"

"'American Pie' was my favorite number of the season because it involved so much of the cast and crew, and we all had to work together as a company to make it happen. It was also the emotional culmination of the season for the characters so it was a very satisfying and beautiful ending."

"The moment in the pilot where Zoey looks into the photo frame and sees Mitch stand up behind her to sing 'True Colors' is hands down my favorite. It gave me goosebumps, and it was when I knew we were making a truly special show."

"Maybe it's because it's a newer number, but 'Into You' is a new hit for me. John Clarence Stewart is an incredibly effective communicator, and seeing him have an opportunity to do something more subtle was super powerful."

Instead of just giving us her favorite, we had Jane share a few of her musical memories from the series.

Hardest song to get through: "In the [season two] finale, there's a number that I've never cried so hard in between takes, that we had to take a break."

Favorite sexy song: "The one Max and Rose did at MaxiMo—'Need You Tonight.'" (Season 2, Episode 8)

Most complicated choreography: "'Nowhere to Run' was actually really complicated, and I did not have that many rehearsals—I think two. And it was like three dance numbers that were super dance heavy." (Season 2, Episode 3)

Favorite song you got to sing: "That's a secret!"

Favorite song behind-the-scenes: "'I've Got the Music in Me,' 'Crazy,' 'Black Man in a White World.' One of the numbers from the season two finale that I can't tell you about. Actually, I think the end of the season this year has some really great stuff to look forward to."

(E! and NBC are both part of the NBCUniversal family.)