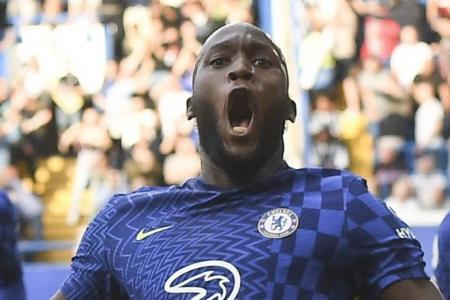 After scoring on his second Chelsea debut in the win at Arsenal last month, Lukaku made it three goals from three appearances with a pair of predatory strikes.

Lukaku, who previously played for Chelsea from 2011 to 2014, is back with the Blues following his club record £97.5 million (S$180.9m) move from Inter Milan in the close-season.

The 28-year-old had never netted in front of Chelsea's home fans before, but he ended that drought in the first half to the delight of the 40,000 capacity crowd.

Mateo Kovacic scored Chelsea's second goal and Lukaku struck again in the final moments as the European champions made it three wins from their first four league games.

Thomas Tuchel's side are second in the English Premier League, behind leaders Manchester United on goals scored.

Praising Lukaku's impact, Tuchel said: "He's full of confidence and fully aware what he wants to do. He is absolutely confident of scoring, so he's helped us a lot...

"It was absolutely not a comfortable evening. They caused us a lot of problems, particularly in the first half.

"It was a super dangerous game for teams who have so many players out on international duty."

Saul Niguez made his Chelsea debut after his deadline-day loan move from Atletico Madrid as Tuchel made six changes from the 1-1 draw at Liverpool before the international break.

Explaining why he took the Spaniard off at half-time, Tuchel said: "It was a hard decision, but he was struggling, and I take the responsibility for that.

"It was also a bit hard for him to adapt to our system. So we thought to give a bit more stability and switch the shape to 5-3-2 in the second half with Jorginho." - AFP