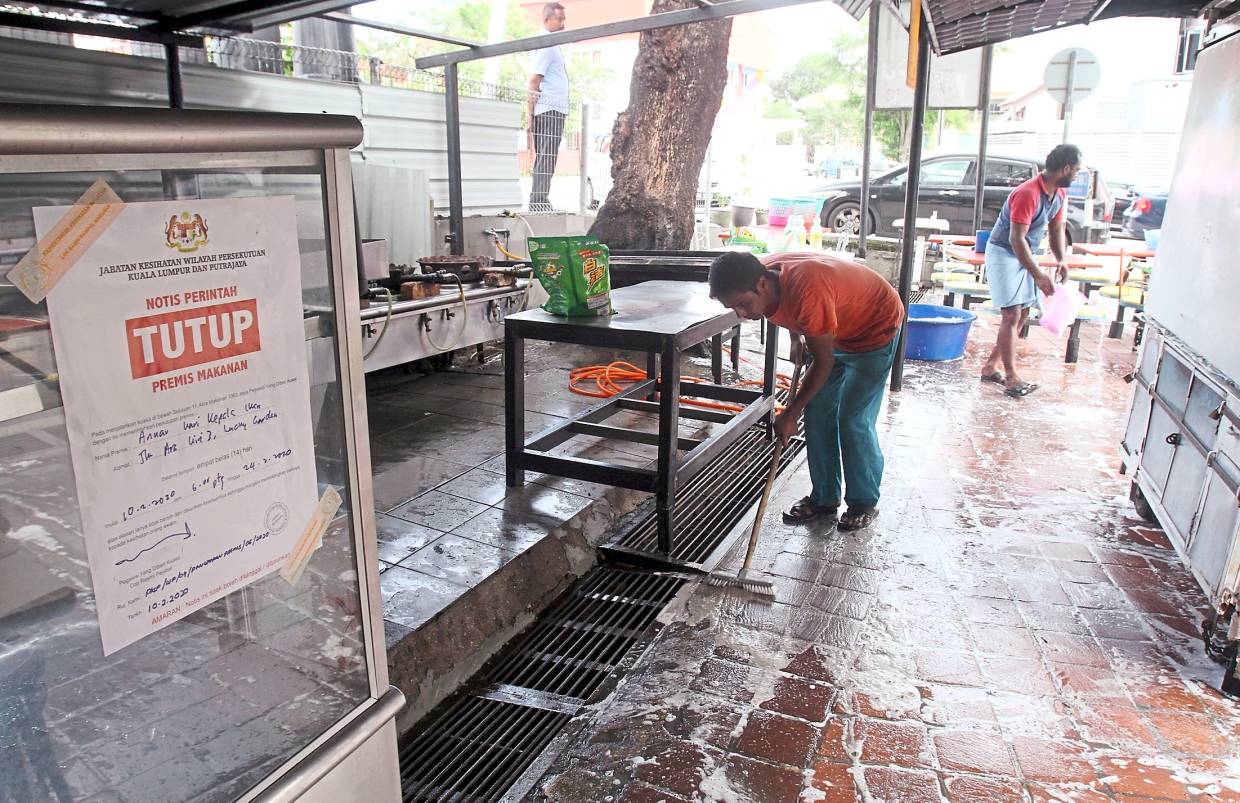 STALL operators at the Lucky Garden Hawker Centre in Bangsar started major clean-up works yesterday after health authorities ordered the businesses to cease operations for being dirty. Workers were seen scrubbing the floors, drains, stoves and wiping down the chairs and tables, as well as the ceiling and exhaust fans. Five stalls at the hawker centre and a restaurant in Lorong Ara Kiri 3 were ordered to close on Monday for two weeks until Feb 24. They were ordered to carry out the clean-up exercise by the Federal Territory Health Department (JKWP) for violating the Food Act 1983. Department director Dr Param Jeeth Singh ordered the closure in light of the coronavirus (Covid-19) outbreak. Fifteen other stalls were also compounded for various other infringements. Nearby residents had made numerous complaints on poor hygiene conditions at the hawker centre. There were complaints of stall workers and patrons openly urinating in drains due to the lack of toilet facilities for them. The hawkers were also accused of disposing of rubbish indiscriminately as well as placing rubbish bins close to cooking areas. Anuar Zainal Abidin, the owner of the popular Anuar Kari Kepala Ikan stall, which was one of the stalls ordered closed, claimed that complainants were jealous of his success. When StarMetro showed him photos of the filthy condition of his stall as well as images of his staff urinating in public, Anuar said, “We told them to urinate at a nearby supermarket, not the drain, but they refused,” he added. Anuar said he was merely offering a service to the public as his food was cheap. Anuar’s brother, Taufik Ismail, said one would not find another eatery in Kuala Lumpur that offered a meal of rice, chicken and vegetables for only RM3. “We get 3,000 people eating at our stall every day, we are popular. We are very busy between 11am and 2pm; during that time we don’t have time to clean up,” he said, adding that they clean up whenever they found the time. “We are not 100% perfect but we are trying to clean up,” Anuar said, adding that JKWP had advised them on what to do. Another stall owner who refused to be identified said they were doing their best to clean up and hoped the closure notice would be lifted. Meanwhile, a group of residents from Lucky Garden plan to stage a protest as they want the authorities to relocate the stalls. “There should not be any compromise on health and hygiene,” said resident Yasmin Abdullah. A. Selvadurai said residents had had enough with the health and social problems brought by the stalls and its patrons. “We are not against the stalls, just that they must be relocated to a more conducive location,” he added. The residents suggested that the stalls be moved to a nearby Rukun Tetangga building. P. Sukerathavan, a long-time resident of Bangsar Baru, said he had been frequenting the stalls for the past 35 years as he enjoyed the food but at the same time agreed that the stalls were dirty. “I come here in the evenings for curry puffs. The food sold here is not only tasty but also affordable. You can’t get these prices anywhere else. “However, cleanliness is very important when it comes to selling food. I suggest that the owners clean up the stalls when they are closed for business,” he said. The stalls, which were previously located along Lorong Ara Kiri 1, were temporarily relocated to Lorong Ara Kiri 3 in 1998 before they were to be moved to a permanent site, but the relocation never took place.