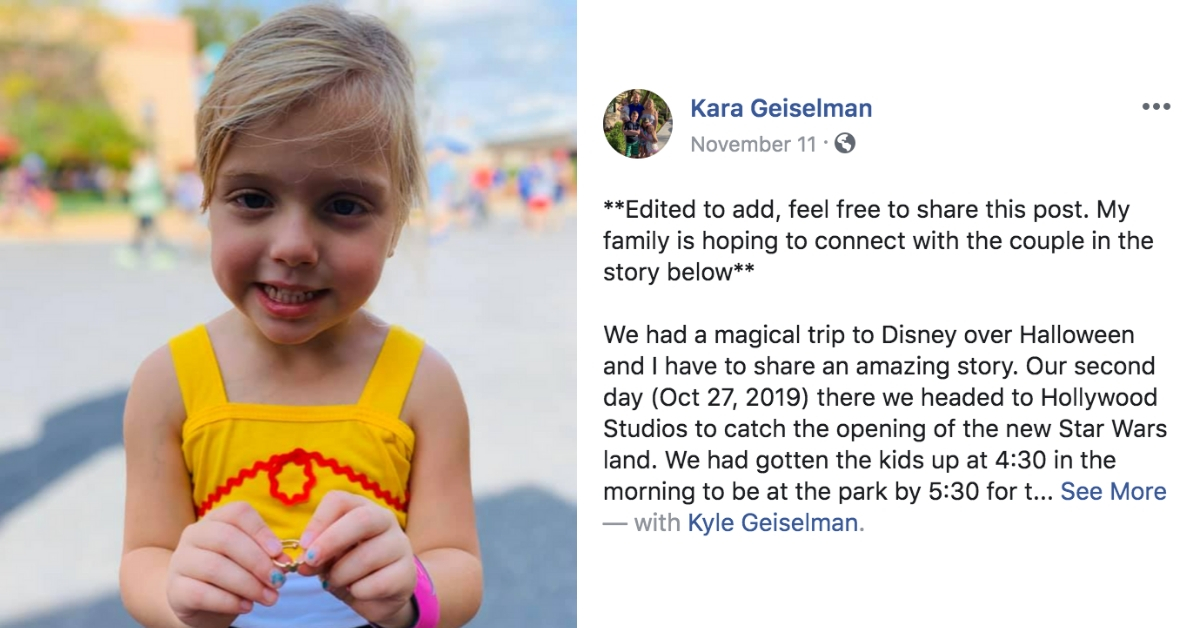 A family is asking the public to help find a grieving couple that they met at Disney World Hollywood Studios in Florida.

In a November 11th Facebook post, Kara Geiselman shared the touching story of how the couple gifted her daughter Belle a spontaneous golden memory.

“**feel free to share this post. My family is hoping to connect with the couple in the story below**”

“We had a magical trip to Disney over Halloween and I have to share an amazing story. Our second day (Oct 27, 2019) there we headed to Hollywood Studios to catch the opening of the new Star Wars land. We had gotten the kids up at 4:30 in the morning to be at the park by 5:30 for the 6am opening (it was amazing).”

Kara’s daughter Belle and husband Kyle met the couple by chance while visiting the Hollywood Studios park in October.

“By mid-afternoon we were all tired and enjoying a much needed snack break in the shade. Belle had followed Kyle to throw something in the trash and in the meantime she almost ran directly in to a couple. The couple stopped in their tracks and Kyle apologized to them for her carelessness.”

Kyle was walking with Belle, when the 4 year-old accidentally ran into the couple. But instead of getting angry, the strangers asked if Belle liked gold.

“The woman then looked at her husband and asked Kyle if Belle liked gold. Confused Kyle said yes. She then asked if they could gift Belle something. Kyle said of course. The couple proceeds to tell Kyle how they were at HS marking the one year anniversary of their daughter’s Make-a-Wish trip.”

To their surprise, the gift that they gave Belle was a gold Mickey Mouse ring.

“On their initial trip they had bought 2 gold Mickey Mouse rings, one for their daughter and one to gift to a child who in their words, ‘was adorable like their little girl.’ Moved beyond belief that they chose our daughter to memorialize their daughter with, Kyle was at a loss for words.”

The grieving parents had always planned to give the ring to another child.

“He wanted to tell them so much, that he was sorry for their insurmountable loss and about our own little warrior but in the moment only thank you came out. The fact that they choose Belle without knowing her struggles in life brings tears to my eyes.”

“They didn’t know that we were back at the place where our daughter surprised us all and starting eating by mouth for the first time at 18 months old, or that this trip was the first time she traveled to Disney without needing a feeding tube for nourishment or an Oxygen mask on the flight.”

“This little gold Mickey Mouse ring will forever be kept as a priceless gift and always cherished.”

The Geiselman’s were extremely moved by the gesture. In shock, they could only say “thank you” and express their condolences. Kara used the now viral Facebook post to talk about why the moment left them shell-shocked.

The family went into more detail about their daughter’s health issues with Rhode Island’s NBC 10.

“Due to twin-to-twin transfusion syndrome, Belle was born prematurely at 30 weeks and 5 days. She spent 126 days in the NICU, fighting to breathe and eat, and also required a feeding tube for a year and a half after her birth.”

Belle’s identical twin, Milly, received more nutrients while sharing their mother’s placenta before they were born. Both children experienced different health issues from the syndrome.

People on Facebook are touched by the magical chance encounter.

The Geiselman’s are hoping that the post will help them reconnect with the mysterious couple so that they can properly express their gratitude.

So far they are still searching for the couple.