Good morning. I am writing to you from the grave. The cause of death? Well, I peacefully passed away this morning after Normani and Megan Thee Stallion pressed their thigh-high boot heels deep into my neck with the release of the their collaborative single "Diamonds."

Dropped at the stroke of midnight on January 10, Megan and Normani teamed up for the Birds of Prey and the Fantabulous Emancipation of One Harley Quinn soundtrack, the all-female film starring Margot Robbie, Jurnee Smollett-Bell, Rosie Perez, Mary Elizabeth Winstead, and more. 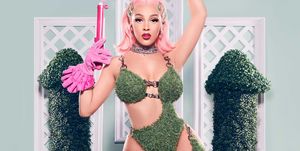 "Diamonds" is breathtaking, brilliant, incredible, supercalifragilisticexpialidocious, if you will. Megan gives us bars: "I'm a super she-ro, bitch, don't try me, hoe/Bad like a villain, I pop it and then I reload." Normani gives us a stellar vocal performance, adopting a singsong rap style that compliments Megan's spicy flow. But it's seeing Megan and Normani in the visuals that sent me six feet under.

Another scene sees Normani resting in a diamond-encrusted aerial ring wearing a diamond necklace, rings, and earrings before paying tribute to Marilyn Monroe in Gentleman Prefer Blondes with a similar choreographed routine.

The visual is packed with other subtle references, including the ladies' costumes, which feature the names of their own songs written all over, such as "Ca$h Sh*t" and "Cognac Queen" on Megan's bodysuit, and "Dancing With a Stranger" and "Slow Down" on Normani's leg.

Normani and Megan aside, the Birds of Prey soundtrack will also feature new singles from Doja Cat, Halsey, Saweetie, Summer Walker, Lauren Jauregui, and more. A new song will be released every week until the film hits theaters on February 7.