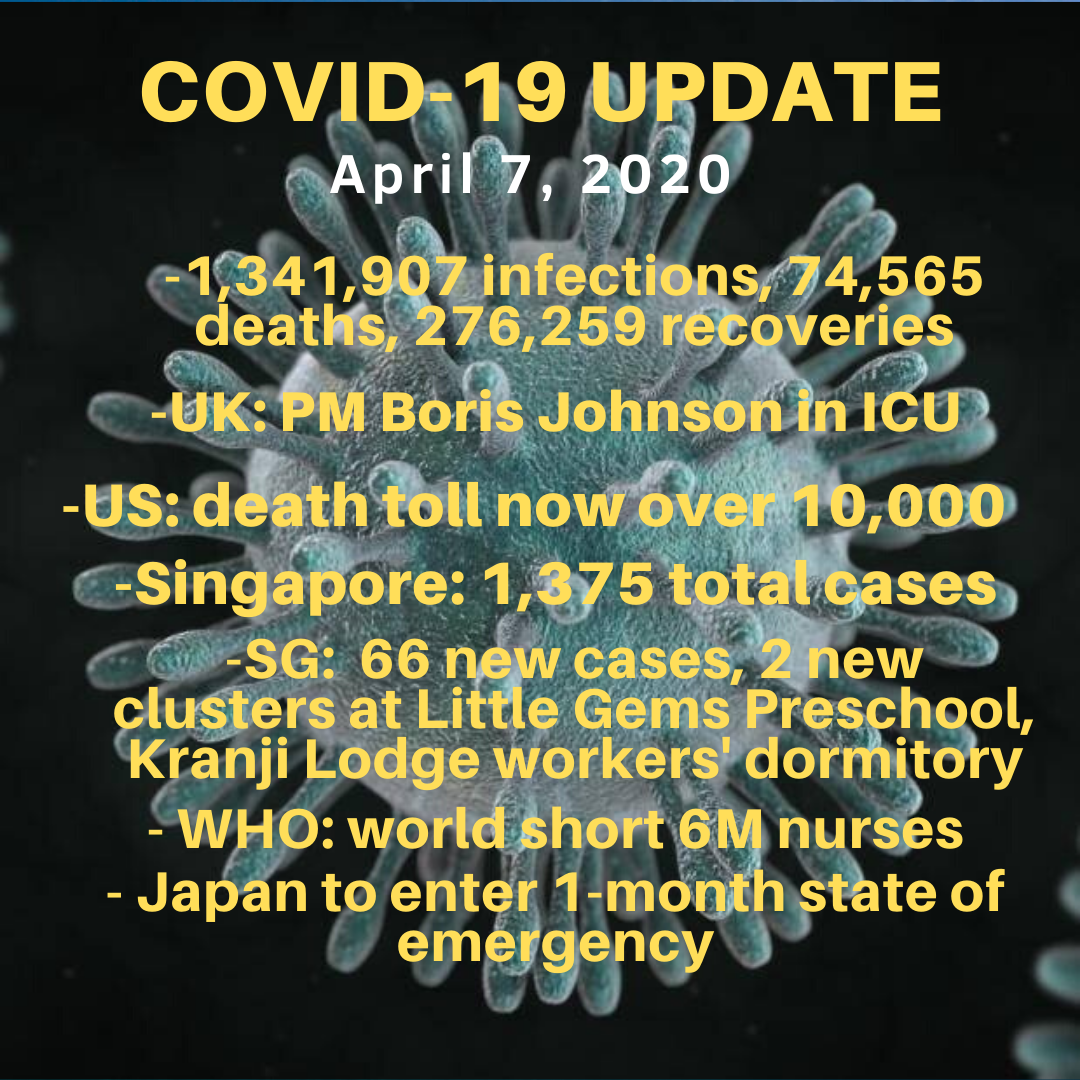 In the United Kingdom, Prime Minister Boris Johnson was moved to the Intensive Care Unit of St Thomas’ Hospital in central London after his condition worsened on Monday (April 5). According to his aides, Mr Johnson remains conscious, although he has asked Dominic Raab, the UK’s foreign secretary, to stand in for him should the need arise. The aides added that Mr Johnson’s move to the ICU was precautionary, with a ventilator on standby if it is needed. He wad admitted to hospital on Sunday night, due to a persistent cough and high fever. The Prime Minister was confirmed to have tested positive for Covid-19 on March 27. The UK has 51,608 confirmed cases and 5,373 deaths.

The US breached 10,000 deaths, and its total number of cases now surpasses that of Italy and Spain. Nearly half of the deaths in the US occurred in New York, the state which has been hardest-hit by the coronavirus. The US has also experienced testing delays, as well as a shortage of protective equipment and ventilators.

In Singapore, there is now a  total of 1,375 total cases of Covid-19 since the first infection was recorded in late January. Six people have died and 344 have been discharged from the hospital. The Ministry of Health (MOH) announced on its website on the evening of April 6 that the country has 66 new cases of the coronavirus. One is an imported case, and the 65 others are local cases.

MOH found that from the new cases, 35 are linked to existing cases. Twenty-four of those cases are linked to clusters at foreign worker dormitories and 11 were linked to non-dormitory clusters. For the other 30 cases, contract tracing is still ongoing.

Two new clusters of infection have also been announced. One is at Little Gems Preschool at Ang Mo Kio Street 62, which has three cases of Covid-19. The other is at Kranji Lodge dormitory for migrant workers, where there are also three cases.

The World Health Organization (WHO) said on Tuesday (Apr 7) that there is a shortage of 6 million nurses around the world. Nurses, according to WHO, Nursing Now and the International Council of Nurses (ICN), compose over half of health workers worldwide. WHO said that the greatest lack is in Africa, Southeast Asia, the Middle East and parts of South America.

Prime Minister Shinzo Abe said on Monday (Apr 6) that the country may announce a state of emergency for a number of its major regions by today (Apr 7). This is due to a steep uptick in Covid-19 cases especially in areas such as Tokyo and Osaka. Declaring an emergency would also release a stimulus package worth US$1 trillion, and would also empower regional governors to impose more stringent control measures to contain the spread of the coronavirus.

Mr Abe said, “We envision, for a period of about one month, that we will ask further cooperation of the Japanese people to reduce person-to-person contacts that lead to infections.” -/TISG

Read also: Third round of budget measures to help Singaporeans through Covid-19 crisis