Pakistan coronavirus: 'We can't see it, but everyone is terrified'

Enfagrow official online shop: The best possible for your child's future!
Afraid to go to the cinema during the epidemic? You can also watch blockbusters online! 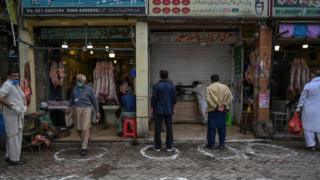 When 50-year-old Saadat Khan returned to his village outside the northern Pakistani city of Mardan from a pilgrimage in Saudi Arabia earlier this month, a feast was thrown in his honour.

According to his son Haq Nawaz, about 600 people attended.

"We cooked rice, meat and chicken," he told the BBC. The "whole village" came and congratulated him, he added.

It's traditional in Pakistan to celebrate the achievement of performing such an important religious ritual. 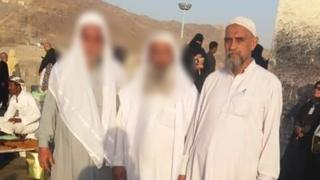 Mr Khan (right) seen during his pilgrimage with two others

Just days later, however, Mr Khan would become the first person in the country to die from coronavirus, and his entire local district would be placed under a strict lockdown.

Out of 46 people tested for the disease in the community so far, 39 have been confirmed as positive. Two friends who flew back with him from Saudi Arabia also contracted coronavirus. 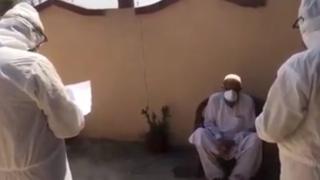 Mr Khan's death highlights the challenges of fighting the infection in developing countries like Pakistan, where large extended families live together, often in crowded conditions, and where healthcare systems are already struggling. One health expert warned the country was heading for "disaster" if adequate preventions were not implemented.

There have been about 1,000 confirmed coronavirus cases and eight deaths in Pakistan. A substantial portion are people who were travelling back from neighbouring Iran, which has been particularly badly affected, but there are growing fears about how the virus is spreading.

Professor Javed Akram, vice-chancellor at the University of Health Sciences in Lahore, told the BBC "domestic transmission" within Pakistan was now his main concern.

Mr Akram added that the true number of cases in the country, as elsewhere in the world, was likely to be far higher than had been recorded, because of a lack of testing capacity. So far, about 6,000 tests have been performed, while Pakistan's population is over 207 million. 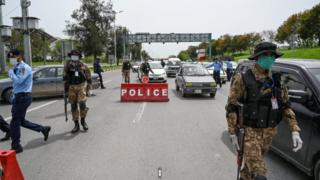 Fears are growing nationally of a major outbreak

The teeming port city of Karachi is Pakistan's commercial hub, and has been home to a rising number of coronavirus infections. Amongst the patients is Saeed Ghani, the education minister for Sindh Province.

Speaking to the BBC on the phone whilst in isolation, Mr Ghani said it was unclear how he became infected and he had not developed any symptoms.

He said officials were aware that reported figures were not necessarily an "accurate reflection" of the reality on the ground, and that led the local Sindh government to implement a strict lockdown earlier this week. All non-essential travel outside the home has been banned, while only food and medical stores are allowed to stay open. Similar measures are now also in place across the country.

Prime Minister Imran Khan, however, has appeared out of step with local provincial governments. He had previously said a "lockdown" would not be sustainable in Pakistan, as it would cause too much harm to those on low incomes.

After provincial governments went ahead and introduced measures tantamount to a "lockdown" anyway, Mr Khan attempted to explain he only opposed what he described as a "curfew," while also outlining some measures to protect the poorest in society, who are dependent on daily wages to feed their families. Unlike other Muslim countries, his government has not ordered an end to congregational prayers on Fridays.

For Prof Akram, implementing preventative measures in Pakistan is crucial, as he says "curative care is not an option". Given that richer countries such as Italy had struggled to cope with the outbreak, the more "primitive" health facilities in Pakistan would be quickly overwhelmed, he said.

Outlining the challenges faced by health professionals in the country, one of the seven confirmed deaths of coronavirus patients in Pakistan so far was that of a young medic. Dr Usama Riaz, 26, was working in northern Gilgit-Baltistan, screening pilgrims returning from Iran, when he contracted the disease and died.

Medical professionals have criticised the lack of protective clothing provided to frontline staff. One of Dr Riaz's colleagues told the BBC they had now been provided with full protective suits, but he was concerned other doctors elsewhere had not. 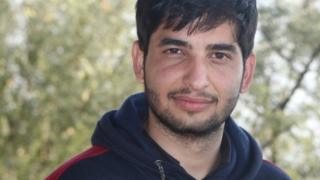 "Life and death are in the hands of God," he said, "but to work without protective equipment is suicide."

Officials say they are urgently attempting to improve the resources available to healthcare workers.

Back in the village of Saadat Khan, Pakistan's first coronavirus fatality, residents are trying to come to terms with the crisis.

One relative of Mr Khan's, who had tested positive too, despite not having any symptoms, told the BBC he couldn't understand how the disease could be so deadly, so quickly.

"We can't see it, but everyone is terrified of it."