This ⁠— in a nutshell ⁠— is how 41-year-old climate scientist Winston Chow explained the climate change issue.

Climate change is a wicked problem

“Climate change is just as tricky a problem ⁠— a wicked problem as some people would say it,” Chow added.

“[This is akin] to the problem of Singapore football, we all want it to be great just like we all don’t want our climate to reach a certain stage when we will all die.” 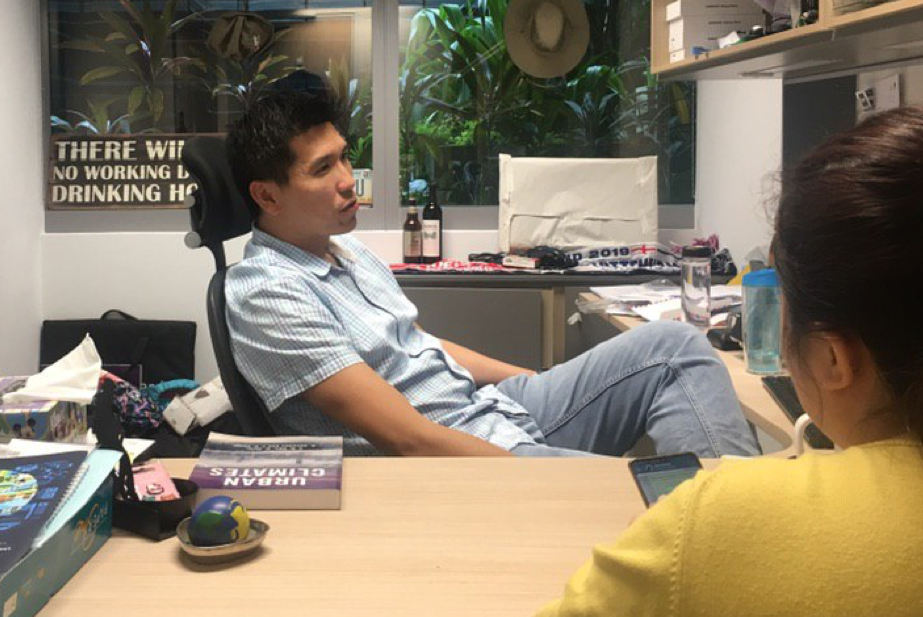 Just in case you’re wondering, Chow’s research areas focus on urban climates and urban vulnerability to climate change, such as how cities like Singapore adjust to floods and droughts.

Chow, who is also an associate professor at Singapore Management University, added that past observations and model projections into the future point to a definitive conclusion ⁠— climate change is real.

Warning signs such as rising global temperatures, sea levels and the occurrence of frequent and extreme weather (think severe storms and droughts) are already happening.

The change in the physical environment will then ramify into business, social and personal issues as people are affected. In response, people have to make drastic changes to their way of life to cope with climate change.

“Unlike Singapore football, climate change is in all likelihood an existential question for Singapore, especially with sea level rise.”

This is why it is critical to get all stakeholders aligned on climate change issues quickly, Chow highlighted.

Only Singaporean Lead Author of the Intergovernmental Panel on Climate Change

Besides his own research and teaching students at SMU, Chow is also a Lead Author that drafts a chapter on “Cities, Settlements and Key Infrastructure, and a cross-chapter paper on Cities and Settlements by the Sea” for the Intergovernmental Panel on Climate Change’s (IPCC) Sixth Assessment Report, to be due in 2021/2022.

Chow is one of the three Singapore representatives contributing to this IPCC report.

In fact, he is the only Singaporean Lead Author contributing to the upcoming IPCC sixth assessment cycle. The other two representatives are Review Editors who help authors to address feedback on the chapter drafts from reviewers.

The Intergovernmental Panel on Climate Change (IPCC) is the United Nations body for assessing the science related to climate change.

Scientists and academics worldwide review thousands of scientific papers each year to identify what the scientific community agrees on, differs in opinions and what more needs to be researched on.

After each round of assessment, the IPCC will summarise the most up-to-date developments with regard to drivers and ramifications of climate change as well as its possible adaptation and mitigations into a comprehensive summary.

Singapore’s government believes that any action taken should be based on scientific research and evidence which is why it has been supportive of the IPCC.

Just last October, Singapore hosted a scoping meeting for 80 scientists to scope the outline, basically what to include, in a synthesis report for the policymakers.

Ploughing through tons of scientific papers related to climate change

Chow’s chapter focuses on East and Southeast Asian cities and he has been ploughing through scientific journals with 11 other contributing authors from across the world who have expertise related to urban climate.

The team analyses tons of research papers to conduct a comprehensive literature review before assessing the likelihood of the impacts that climate change has on cities according to what these papers suggest.

The assessment is done based on a standard template, through numerous Skype conferences (because air travel produces carbon emissions, which is bad for the environment).

“We meet in person about two times every year with lots and lots of video conferences. We are literally spread across the world, so say it’s Friday night 8pm Singapore time… it is midnight in New Zealand, noon in London, 2pm in Africa, 8 am in New York City, 4am in California depending on the season. So we meet via video conference during those times. It’s incredibly refreshing to work with people like that.”

Chow’s involvement in the IPCC also provides insights into the value that Singapore can bring to the global stage in tackling climate change.

He shares that the fellow Lead Authors that he works with are fascinated by how Singapore is adapting to climate change such as the huge investment of S$100 billion from the government.

The S$100 billion investment will be spent over the next 100 years to fund coastal protection measures, starting with the more vulnerable and critical areas in Singapore. The government is exploring possible financing options, which could be through borrowing, ministry budgets or reserves.

Singapore is also fortunate that political parties are pretty much aligned in terms of their stance on climate change such that none of them is actually denying climate change.

For Chow, it is fascinating to see the politics behind climate change as he gets to meet not just the scientific community but also the government delegates at IPCC sessions organised several times a year.

“It’s an eye opener that science is not enough.”

Interestingly, the unique identity of Singapore actually enables us to play a diplomatic role.

“Being an island state, we have more in common with other island-states like Fiji and Maldives than we realise,” Chow added. 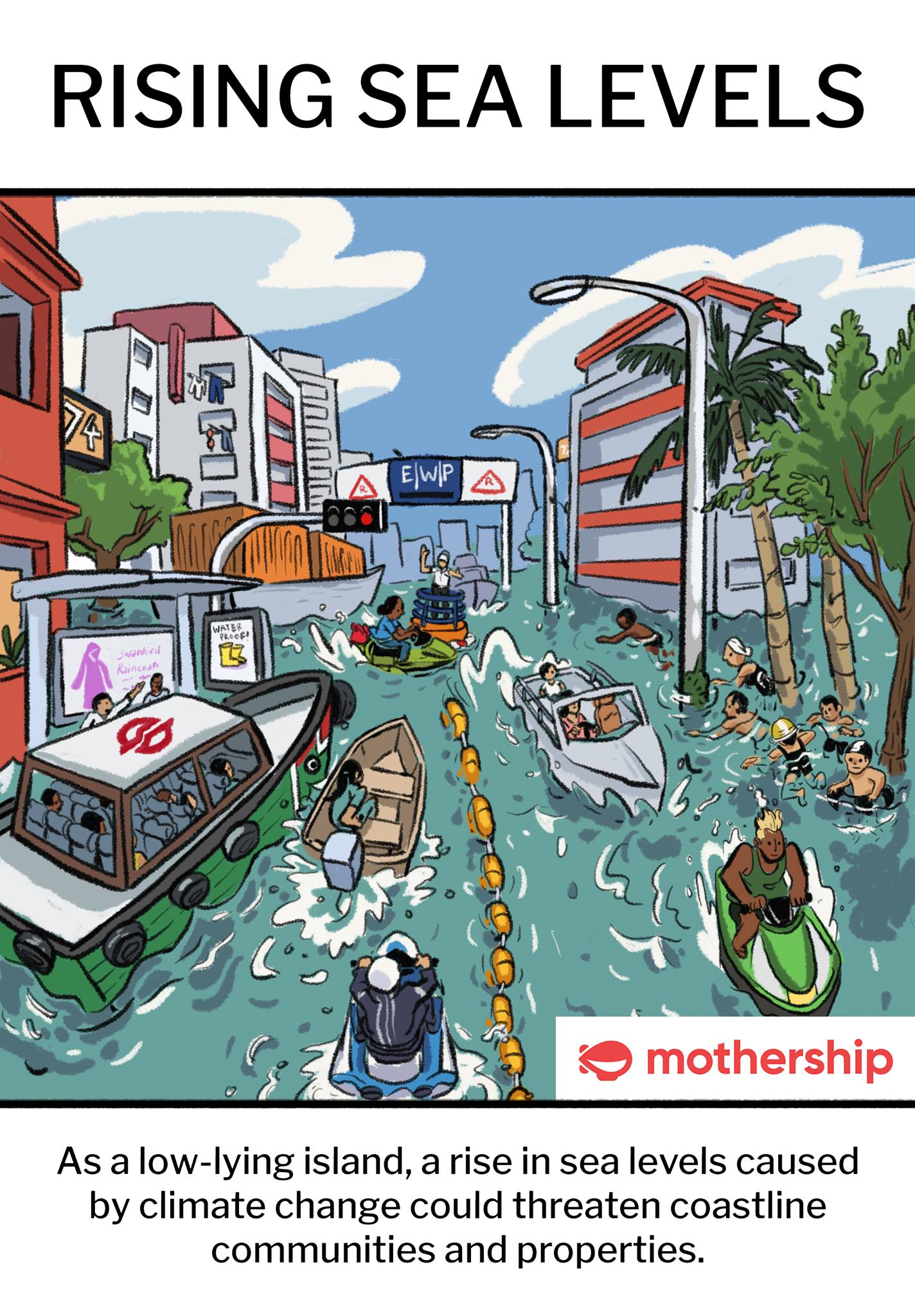 Thus, Singapore can play a role in establishing consensus between nations with different vested interests.

Finding common ground is also important to interest individuals who are apathetic towards or in denial of climate change.

The avid football fan gave another example of how climate change is affecting our lives:

“Football is already adapting to climate change. Look at the games played in Brazil [in 2014], extra water breaks were given.”

And that’s how he tried to broach the topic of climate change with some of his football kakis which helped to bring their attention to it.

Having said that, having a better understanding of what climate change is about is not enough. And the question is how do we move forward to prevent a disastrous outcome from happening?

The 2018 IPCC Special Report on Global Warming of 1.5°C highlighted that limiting global warming to 1.5°C, which will help avoid a number of climate change impacts, would require rapid, far-reaching and unprecedented changes in all aspects of society.

Well, the bucket is about to overflow in a few short years, unless we:1. Turn off the tap (urgently)2. Put a hole in the bottom to remove CO₂ (negative emissions)#COP25 #CarbonBudget @FutureEarth @gcarbonproject https://t.co/ycYcuFSPdF pic.twitter.com/o7JwZt7GlX

Chow described that as a “major turning point” as limiting global warming to 1.5°C becomes the clear goal that the world should try to achieve.

While Chow has reservations on some of the options available, at least a path forward has been charted given that more critical knowledge and action gaps have been identified.

“In the report, there was a strong statement that you need rapid unprecedented transition in all aspects of society including changes in behaviour, politics, practice of using energy.. it’s getting there.”

One of the biggest transitions is to move away from fossil fuels.

“I am optimistic that things will reach a point where everyone globally will realise that we have to move away from fossil fuels for energy production. For power generation, for running our cities, for running our industries and all, we move to renewable energy. That will be one of the biggest things to do in terms of reducing the likelihood of breaching the threshold,” Chow said.

Singapore has also been ramping up its use of solar energy, as it is our most promising source of renewable energy.

Since the 2000s, Singapore has progressively switched from fuel oil and diesel to natural gas – the cleanest form of fossil fuel.

Most recently, the Housing and Development Board has announced its plans to double its solar capacity to power about 135,000 four-room flats.

In particular, Tengeh reservoir will house one of the world’s largest single floating solar systems, with a capacity of at least 50-megawatt peak. This will eliminate the need to emit 28,000 tonnes of CO2 every year, equivalent to removing 6,000 cars off our roads.

Singapore is already taking climate action, and we have done so for a long time.

Individuals have to respond to climate change in their own ways quickly too. While individual efforts may be small, they are definitely not insignificant.

Chow shares that his two daughters, as well as his students, are motivating factors that have kept him going in this fight against climate change.

“Being able to tell my children I did something. I don’t want to die knowing that I was a bystander…Bottom line is I am answerable to my kids and my students. That will be the motivation.”

He also added some examples of changes that individuals can make to their lifestyle in response to climate change.

These include the three Rs — Reduce, Reuse and Recycle, particularly efforts to reduce waste and carbon emission through going car-lite or car-free, for example.

Another climate action that one can consider is to consume less meat, especially red meat, as the meat and dairy industry is the world’s third-largest emitter of greenhouse gases.

Singaporeans can also switch to an electricity plan powered by solar energy (yes, you can do so in Singapore).

Making a drastic lifestyle change for the environment does not have to be a painful one but like what Chow says,

“If you consider these to be easy changes to your lifestyle, go for it.”

This sponsored article by the Ministry of the Environment and Water Resources reminds us all that people will need to change faster than climate change.