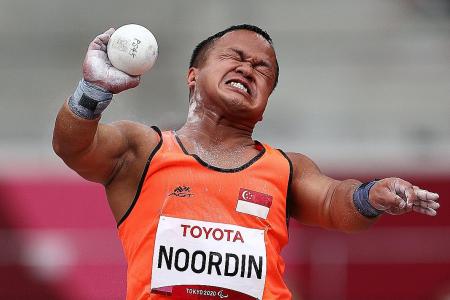 As personal bests tumbled - six, including a world record, were set in the dramatic Tokyo 2020 Paralympics men's F40 shot put final - Singapore's Muhammad Diroy Noordin pitched a national record of 9.92m with the last of his six throws yesterday.

The 29-year-old, the Republic's flag bearer at the opening ceremony, finished eighth of nine competitors at the Olympic Stadium.

The gold went to Denis Gnezdilov of the Russian Paralympic Committee, although he needed to break the world record twice in a day to win it.

On his final attempt, he threw 11.16m to edge out Iraqi defending champion Garrah Tnaiash by 1cm.

Earlier, Gnezdilov had thrown 11.02m with his first toss to surpass the previous 11.01m record, set by Portugal's Miguel Monteiro, who claimed the bronze with his 10.76m launch.

Diroy, who has dwarfism, also twice improved on his previous mark of 9.78m set at the Singapore Athletics Performance Trial 2 in June.

While he was pleased to rewrite his national record twice, he was a tad disappointed that he did not surpass the 10m mark or win a medal.

Speaking to the media via a video conference call after his event, he said: "We put in so much effort and trained hard to go (to the Paralympics) to win a medal, but I'm still happy that I did my personal best."

His result is a significant improvement on the 7.29m he threw to finish ninth out of 10 athletes at Rio 2016, his Paralympic debut.

He hopes to improve on his focus before competing, technique, strength and speed, as he bids to win a medal at his third Paralympics in Paris 2024.

The 22-year-old, who has transverse myelitis - a condition caused by the inflammation of the spinal cord - will next compete in the S7 50m freestyle and S7 50m butterfly tomorrow and on Friday respectively.

At the Tokyo Equestrian Park, Singapore's Laurentia Tan, Gemma Rose Foo and Maximillian Tan finished 14th of 15 teams in the dressage team test to music event after scoring a combined 200.792.

FOR MORE, READ THE STRAITS TIMES

Singaporeans in action at Paralympics