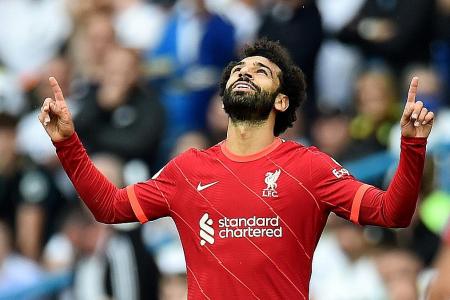 Following a frenetic opening at a raucous Elland Road, where both sides had goalscoring chances, the Egyptian tapped in a low cross from Trent Alexander-Arnold to silence the home crowd.

In the process, he became the 30th player to reach the century goal mark, with only four players having done it in fewer appearances.

Alan Shearer, who turned out for Southampton, Blackburn Rovers and Newcastle United, reached the milestone 100th goal in the fewest matches (124), with Tottenham Hotspur's Harry Kane (141) and Manchester City's Sergio Aguero (147) behind him.

The Reds could have extended their lead, but wasted a raft of chances.

Four minutes after scoring, Salah sent a cross for Thiago Alcantara who steered the ball past Illan Meslier from a narrow angle but the effort was chalked off as Salah was ruled offside.

Just a minute later, Diogo Jota surged to the bye-line and crossed for Sadio Mane, but the delivery was too heavy and the Senegalese had to stretch, resulting in a hooked effort which flew over an open goal.

But the Reds were not to be denied in the second half.

Alexander-Arnold was the architect for the second goal, sending in a corner which was headed into Fabinho's path by Virgil van Dijk, with the Brazilian midfielder poking the ball into the net on his second attempt.

The hosts were down to 10 men after Dutch defender Pascal Struijk's sending-off in the 60th minute for a nasty tackle on Reds' teenage midfielder Harvey Elliott, who reportedly suffered a broken ankle and had to be stretchered off.

Elliott was taken off on a stretcher, receiving applause from Leeds fans as he was taken down the touchline. He later posted a photo on Instagram with the message: "Thank you for the messages guys! Road to recovery."

His place was taken by Jordan Henderson, whose cross into the box in injury-time found Fabinho, who squared the ball to Mane to score.