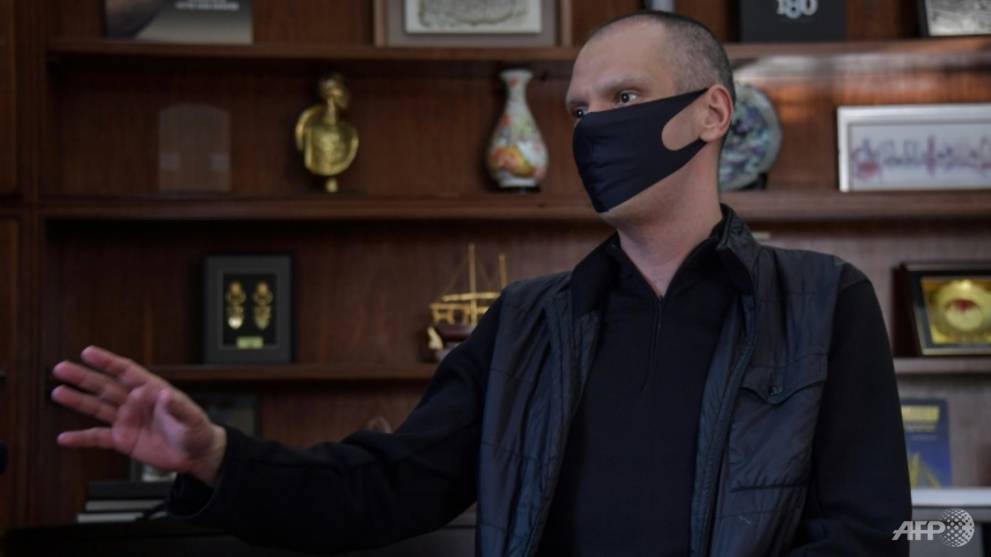 SAO PAULO: Isolated in his office at city hall, Sao Paulo Mayor Bruno Covas is waging a war on two fronts: the cancer survivor is also leading the fight against coronavirus at its epicenter in Latin America.

It's safe to say February 26, 2020 is a day the 40-year-old mayor won't forget anytime soon: just as he was starting immunotherapy for lymphoma - his third cancer in as many months - he got the news that Latin America's first case of the new coronavirus had been confirmed in his city.

Covas had already beaten his two previous tumors into remission with chemotherapy - one in his upper stomach, one in his liver - and he reacted to the arrival of the coronavirus pandemic with the same grit.

"I never considered stepping down," he told AFP in an interview at his offices, wearing a tight-fitting face mask that matched his black outfit.

"The doctors never said I needed to."

Bald and gaunt from his chemo, Covas bears the physical signs of the battles he has waged. But he is working virtually around the clock to run the pandemic response in the hardest-hit city in Latin America, with 40,000 infections and more than 3,000 deaths so far.

Together with Sao Paulo state Governor Joao Doria, Covas implemented the most aggressive stay-at-home policies in Brazil, ordering the closure of schools and non-essential businesses on Mar 24.

That flew in the face of far-right President Jair Bolsonaro, who condemned the "hysteria" around the virus and accused state and local authorities of needlessly hurting the economy.

Covas says his biggest battle is getting citizens in Brazil's biggest city to respect the stay-at-home.

Sao Paulo is Brazil's economic capital, and the bustle of business and the street is what the city is all about.

Monitoring based on cell phone location data indicates that only about half its 12 million residents are respecting the stay-at-home - a source of frustration for Covas.

"But at the same time, it's rewarding to see that six million people are respecting it," he said.

"We've been in quarantine for almost two months, so each day that passes we're asking people to make an extra sacrifice."

The mayor, who took office in April 2018, is leading by example.

Since the stay-at-home started, he has barely left city hall, where he has installed a bed in his office.

Aside from occasional hospital visits or meetings with officials, Covas remains inside his 15-storey headquarters.

A divorced father of one, he receives visits a few times a week from his 14-year-old son.

Other than that, he mainly spends his time working. He says he wants to be available 24 hours a day for the people of Sao Paulo.

With Brazil emerging as the latest flashpoint in the pandemic, with more than 21,000 deaths, and the situation not expected to peak here until June, Covas' stay at city hall probably won't be over soon.

Covas, who hails from the center-right Brazilian Social Democracy Party (PSDB), is the grandson of a longtime Sao Paulo political bigwig, Mario Covas.

A lawyer by training, he was elected a state lawmaker at 26, then became deputy mayor under Doria. When his mentor stepped down to run for governor, Covas took over at city hall.

Covas acknowledged the challenges his administration has faced handling the pandemic, but defended its response.

"We're getting through the crisis in better shape than other major capitals," he said.

Local hospitals are near the breaking point, with 88 percent of intensive care beds full, but Covas said he was proud they had not been forced to turn anyone away.

He and his team are racing to reinforce the health care system. They have opened field hospitals that are caring for 2,500 COVID-19 patients and added hundreds of additional beds to existing hospitals.

He openly discusses the frustrations of watching Bolsonaro downplay the pandemic even as his city is being ravaged.

"The president doesn't care about medical protocols. That is doing a lot of damage," he said.

"It's a scientific reality, and we have to confront it."

BOOKMARK THIS: Our comprehensive coverage of the coronavirus outbreak and its developments

Download our app or subscribe to our Telegram channel for the latest updates on the coronavirus outbreak: https://cna.asia/telegram