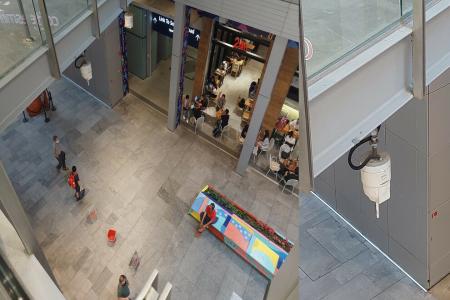 Shoppers alarmed when sprinkler goes off at Orchard Central

Shoppers at Orchard Central might have thought they were safe from the rain outside yesterday (July 5) while they were inside the mall.

Little did they know, the sprinkler system was another thing they needed to keep their eye on.

At around 1.45pm, one of the sprinkler jets in the mall – located on the ceiling of the first story – got activated for no apparent reason.

In videos, a single sprinkler can be seen moving back and forth while unleashing a strong jet of water.

The water had pooled outward, bordering nearby shops.

When TNP went down to the scene at 3.10pm, the water had been cleared, with signage put up warning of slippery floors. A bucket was placed under the sprinkler, which continued to drip water.

Mr Loo Wei Hong, a barista at Coffeesmiths, 22, said he was working when he heard the sound of water.

“When I looked up, there was water coming down. Everybody was shocked,” he said, adding that it happened “very suddenly” and lasted for about ten minutes.