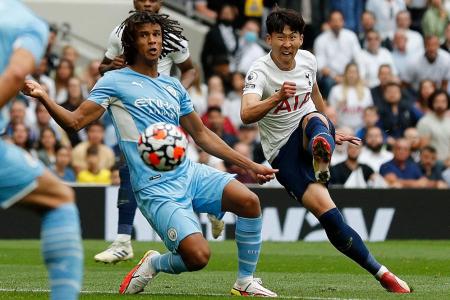 Son Heung-min has probably confirmed the departure of his old friend.

Both teams do. But Spurs' unexpected 1-0 triumph over Pep Guardiola's men will fuel the sense of urgency in the City boardroom.

They have Jack Grealish, but he's a luxury item and arguably one for the future. Kane is the missing link in the short term. His rare skills are required now, a point underlined by City's tepid display in front of goal.

Sixty thousand fans all reached the same conclusion, blue or white, home or away. Kane has to be their man. The ghost of an absent striker loomed large.

According to reports, he was inside the gleaming north London venue, watching his team toil against Tottenham.

Bad jokes aside, there's nothing particularly funny about City's relentless intent and financial ambition. They covet all domestic and continental silverware this season, whatever the cost. And it'll cost £150 million (S$282m) to get Kane.