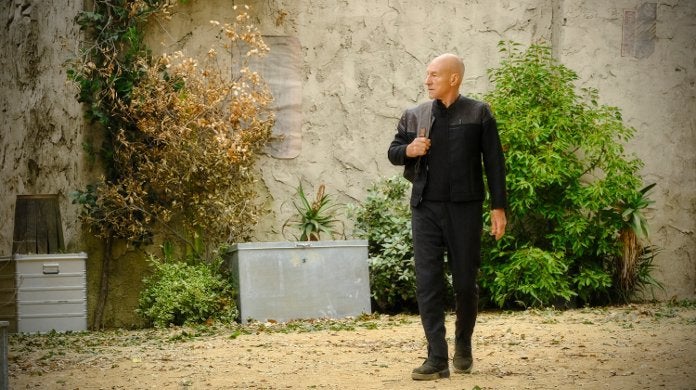 Star Trek: Picard draws ever closer and today has brought yet another look at the upcoming CBS All-Access series. On the All-Access Youtube Channel, a new preview of the series was uploaded today with some insight from the creative team and Patrick Stewart about what is going to be different during this go around with Captain Jean-Luc Picard. The footage shows off more of the retired Captain’s farm in France. He’s not alone as he’s joined by Number One, the resident pup, and a host of helpers. The promos for the show keep stressing that while some things feel familiar, things are going to be a little bit different in this installment. Stewart, in particular, has been adamant about those changes heading into Picard. In a clip from the show, Picard is asked about how he’s sleeping now and he replies almost sounding exhausted. “The dreams are lovely,” he shares. “It’s the waking up that I’m beginning to resent.” We’re dealing with a man who has changed here in this new journey.

Executive Producer Alex Kurtzman spoke about how the team is approaching the series as well. “We wanted to pay homage to what came before, but doing something entirely different. Our mission was to figure out how to build a show that honored Next Gen and many other Trek shows, but really had it’s own unique identity.”

“We are remaining very faithful to Gene Roddenberry’s notion of what the future might be like,” Stewart continued. “In a way, the world of Next Generation had been too perfect and too protected. It was the Enterprise. It was a safe world of respect and communication and care and, sometimes, fun.”

In that previous interview, executive producer Akiva Goldsman added, “It also takes on the same thing that The Original Series took on, that Next Gen took on, that Discovery takes on, which is a hope for a future that is in many ways better than the world we live in today. Star Trek remains aspirational and what we get to do that DS9 got to do a little bit and Discovery got to do is to tell serialized stories, and in serialized storytelling, the characters can evolve in a way that makes it unique. So we think it's a new kind of Star Trek show, made by a lot of people who love all the old kinds of Star Trek."