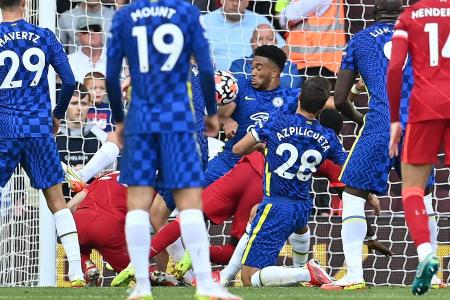 Chelsea manager Thomas Tuchel believes the Blues have shown their title credentials in frustrating Liverpool for 45 minutes, despite being a man down in a 1-1 draw at Anfield yesterday morning (Singapore time).

Kai Havertz's looping header put the visitors in front before Reece James was sent off in first-half stoppage time for handball on his own goal line and Mohamed Salah converted the resulting penalty.

But Juergen Klopp's men failed to make their numerical advantage count in the second half as the European champions showed great determination to dig out a precious point.

"We showed great resilience and deserved the point," said Tuchel. "I cannot praise the team enough. I do not know if there is a harder stadium than at (Manchester) City or Anfield to go one man down."

With N'Golo Kante having to go off at half-time due to an injury and the Reds piling on the pressure, it felt like "the world was upside down", said the German.

"I can't praise the team's resilience enough," he said. "It felt like it would never end. I was hoping we would survive and take a well-deserved point."

The first heavyweight clash of the campaign did not disappoint, with a raucous Anfield atmosphere the backdrop to 90 minutes of high drama.

Klopp made the bold call to give 18-year-old Harvey Elliott just his second EPL start with Thiago Alcantara left on the bench, as the Reds started the match at a furious pace.

Chelsea had barely threatened until they hit the hosts with a sucker punch on 22 minutes when Havertz headed James' corner into the far corner.

The Reds then struggled to pick holes in the Chelsea defence until a corner deep into first-half stoppage time.

Matip's header came back off the crossbar and in the goalmouth scramble, James stopped Sadio Mane's effort on the line.

But referee Anthony Taylor was called over to the pitchside monitor, where he saw images showing the ball had struck James' arm after it bounced up off his thigh. He had also swung his arm forward.

Taylor not only awarded the penalty but also sent off James, a decision which Tuchel described as "unfortunate".

"I was worried the referee looked at one photo and decided it was a red card," he said.

"I would have liked a longer check. I can remember referees that explained if it is a deflection and it is not a very unnatural arm position, it is not a penalty."

At half-time, Tuchel sent Thiago Silva on for Havertz to shore up his defence in anticipation of a Reds onslaught and replaced Kante with Mateo Kovacic.

It worked, as the hosts were largely restricted to long-distance efforts in the second half.

While Klopp felt it was a clear handball by James, he said the double punishment of a red card and a penalty was " absolutely harsh" and had spoilt the game.

He said: "It changed everything, I liked our first half, we were really good, caused Chelsea a lot of problems...

"I would have loved to have seen the game in an 11 v 11 situation and see who comes through better but it's the way it is.

"Everybody thinks playing against 10 men it is easy. It is an advantage in possession but their defensive structure only changes in that they defend a little deeper."

But he did not feel too despondent, adding: "It's really early in the season. We drew against obviously the best team in Europe last year. That's OK, it's a good start. Three games, seven points." - AFP, REUTERS