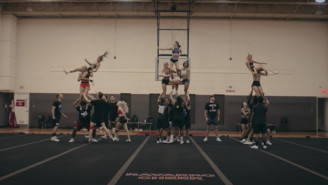 Cheer was an instant hit when it was released on Netflix in early 2020, the documentary series even garnering an SNL sketch of its own. But the story of the cheerleaders from Navarro College in Texas has become much more harrowing in the months since the series initially aired.

One of the show’s most notable cheerleaders, Jerry Harris, was arrested on child pornography charges in September. And according to reports, two more people featured on camera during the show’s episodes have been arrested for sexual misconduct involving minors. According to Deadline, Robert Joseph Scianna, a 25-year-old coach and choreographer, and Mitchell Ryan, a member of the Navarro College team, were arrested in separate cases earlier in the week.