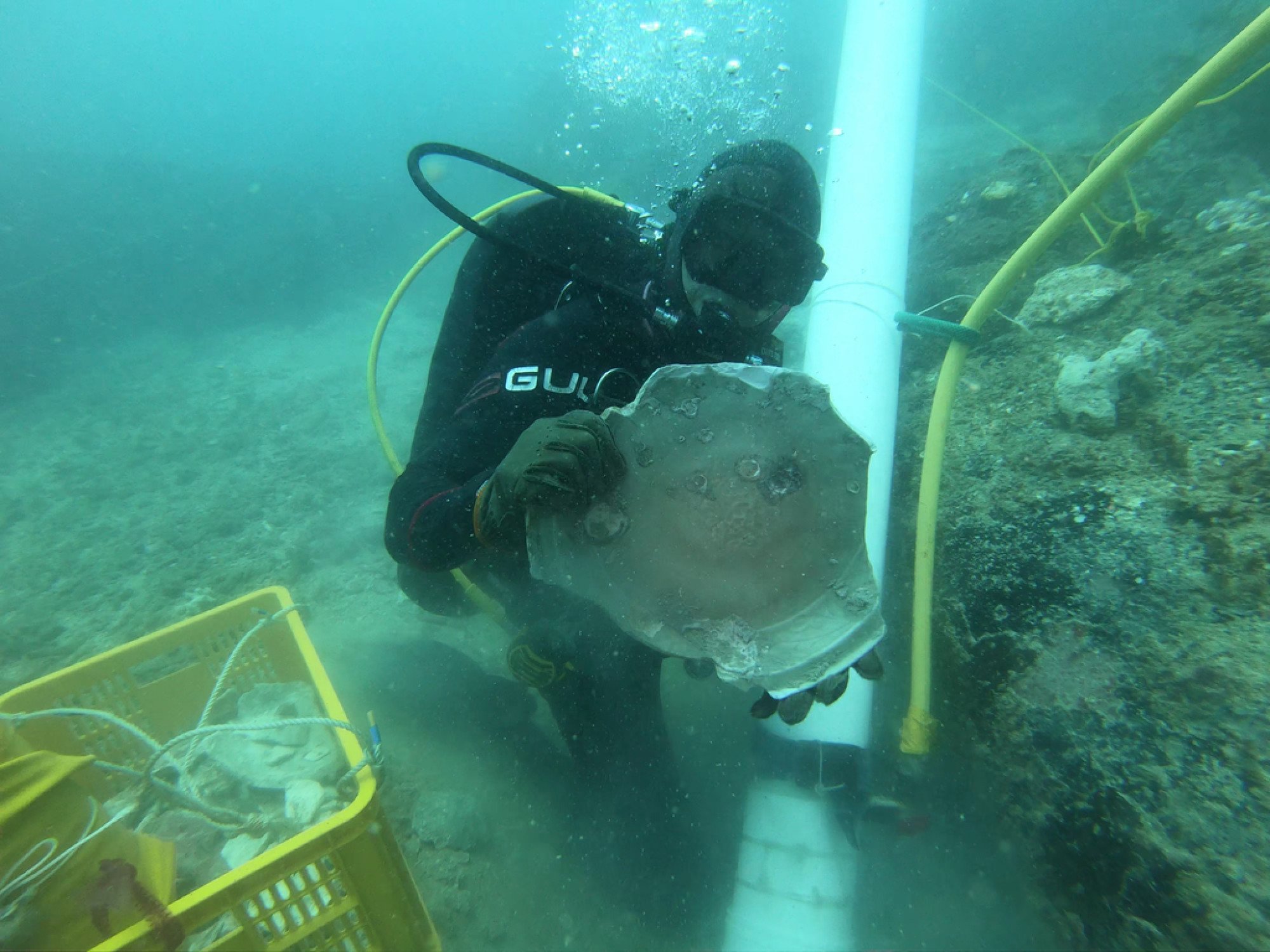 Two historic shipwrecks, one dating back to the 14th century and the other to 1796, have been found in Singapore’s waters near Pedra Branca, offering “invaluable” insights into the country’s

Archaeological research is ongoing, and artefacts from the finds, including rare ceramics, cannons and percussion instruments, are set to be displayed at

The first shipwreck dated back about 600 years and was discovered about 100 metres northwest of the rocky outcrop that forms Pedra Branca. Excavations unearthed Chinese ceramics such as Longquan green-ware dishes and porcelain bowls.

Pedra Branca was regarded as treacherous by seafarers and was home to Singapore’s earliest lighthouse. It is located 65km east of mainland Singapore.

Many of these artefacts are rare pieces and one – a blue and white bottle with a flanged straight neck – is believed to be unique, Flecker said.

Cargo from the second wreck contained more diverse artefacts from the late 18th century, such as percussion instruments and glass beads. Four anchors and nine cannons – typically mounted on merchant ships employed by the East India Company and used mostly for defensive purposes and signalling – were also retrieved from the site.

In 2015, commercial divers came across ceramic plates in a dive operation related to the removal of scraps of old cranes near Pedra Branca. During one of their post-diving dinners, they saw on television that similar ceramic plates had also been excavated at Express Place, and decided to approach NHB and Iseas.

The next year, excavations to recover the first shipwreck started and lasted until 2019. It is impossible to determine the origin of the ship, Flecker said, as there are no surviving hull remains. He added that ships, particularly those from Asia, probably did not have names during that period.

Surveys of the immediate vicinity around Pedra Branca led to excavators chancing upon the second wreck, which has been identified as the India-built merchant vessel Shah Munchah that sank in 1796 while travelling from China to India.

This wreck was discovered 300m east of Pedra Branca and a series of excavations to recover artefacts was carried out from 2019 to mid-2021.

“Had [the Shah Munchah] survived another 23 years, she would most certainly have called at the re-established port of Singapore,” Flecker said.

He was referring to Sir Stamford Raffles’ decision in 1819 to establish a port at Singapore.

“Her incredibly diverse cargo provides great insights into the type of goods that would have been exchanged and bought by the new inhabitants of this fledgling city,” he said.

As there were no claims to the wrecks and their artefacts at the end of the one-month notice period stipulated by the Merchant Shipping Act, they were claimed by Singapore.

Artefacts from the two wrecks are now being stored at NHB and Iseas facilities where they will be cleaned, conserved and catalogued.

“What is significant about [the two shipwrecks] is that they unveil part of our history before 1819,” said Yeo Kirk Siang, NHB’s director of heritage research and assessment.

“The wide range and large quantities of artefacts from the two shipwrecks will bring invaluable insights into the maritime trading history of early Singapore and the region, reflecting the interconnectivity of pre-19th century Singapore.

“Every archaeological excavation enriches our understanding. Singapore’s history is clearly connected to our maritime trade in the past, and even today.

“We will continue to research on the significance of the artefacts and find ways to promote the knowledge, so as to enable more people to learn about them and Singapore’s maritime history.”

Read the original article at