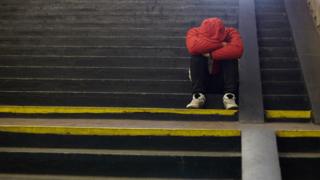 Children at risk of suicide in Wales are still "falling through the gaps", the children's commissioner has warned.

Sally Holland said some young people were being "bounced around the system" and wants a more joined-up approach.

The Welsh Government said it would invest £5m for support in schools.

First Minister Mark Drakeford said it was everybody's responsibility to "weave together a safety net" for young people. Ms Holland welcomed the spending commitment but warned: "There'll be some children who need more support than the school or universal services can offer and that's where we need to make sure they don't get lost in the system.

"Children tend to often now, with their families, fall down through the gaps so they sit on a waiting list for one service, perhaps get turned away from that, get told to go and try somewhere else, what we might say is being bounced around the system.

"We need to make sure there's a no-wrong-door approach - if you reach out for help you don't keep being told you're at the wrong door."

"He was a gorgeous boy. He was really clever. He had taken up with a load of friends at his new school. He was a really talented, artistic young man, very thoughtful. He was brilliant fun," she said.

Gemma, from Cardiff, has been raising money for Papyrus since Alfie's death and is pleased the charity has opened a Welsh office.

"I've been looking out for them to come to Wales and to meet with the team so I think it's brilliant that it's going to shine a spotlight on the problem of young suicide in Wales.

"The number of young lives that are being lost is an absolute tragedy." Despite not having an office in Wales at the time, Richard Owen from Morganstown in Cardiff said Papyrus were "very helpful" when his 17-year-old son Rhod killed himself in 2010.

"We really welcome the fact that Papyrus has opened an office in Wales. Suicide is preventable and Papyrus do marvellous work in equipping people to deal with people in crisis."

In recent months, Ms Holland has travelled across Wales asking organisations to work together through the regional partnership boards.

"I'm pleased to say that some regions are rapidly changing how they respond to those kinds of calls for help so that they get support really quickly from the right people early enough, but other areas still have some way to go."

According to the Office for National Statistics, 38 young people aged 10-24 took their own life in Wales in 2018.

From its new Cardiff office Papyrus will provide advice over the phone to young people contemplating suicide, and those who are worried a young person might be at risk.

The charity will also do outreach work with schools and youth clubs.

Papyrus' head of Wales Kate Heneghan said: "One is too many, 38 is a scandal.

"We know that the more outreach work we do within our Welsh communities the more calls we receive to our helpline from young people struggling, and from concerned others too, not knowing where to turn for support."

Asked if the Welsh Government was doing enough in this area, Ms Heneghan said: "We always say it's not enough, more can be done."

Speaking at the official opening of Papyrus' new office, Mr Drakeford said: "The only way that we manage to weave together a safety net that is strong enough to reach out to those young people who've reached that desperate point in their lives is by making it everybody's responsibility."

On Wednesday, Assembly Members will debate how much support is available to families who have lost a child to suicide.

Lynne Neagle, chairwoman the Young People Committee, said: "It's crucially important, not just because suicide bereavement is a uniquely devastating loss, but also because we know that people bereaved by suicide are much more likely to die by suicide themselves."

If you or anyone you know is having suicidal thoughts, you can contact the Samaritans at 116 123 or jo@samaritans.org; or see their website. The confidential Papyrus line for young people is 0800 0684 141. Or you can visit the BBC Action Line website.

You can also contact the Community Advice and Listening Line for Wales, which offers a free confidential support service with help to find local mental health services, on 0800 132 737 or text 'Help' to 81066.