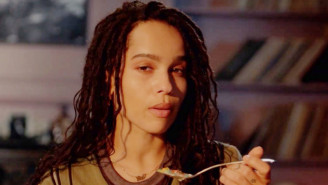 In High Fidelity, the John Cusack-starring adaptation of Nick Hornby’s novel, Rob (Cusack) says that what “really matters is what you like, not what you are like. Books, records, films – these things matter.” He may want to add shows to that list, because High Fidelity has been turned into a Hulu series starring Zoe Kravitz. The Big Little Lies star plays Rob (not the same Rob), a “female record store owner in the rapidly gentrified neighborhood of Crown Heights, Brooklyn, who revisits past relationships through music and pop culture,” according to the official plot description. (If you’re reading this website, you can probably relate with the whole “process everything through pop culture” thing.)

“What’s wrong with me? Why am I doomed to be left? why am I doomed to be rejected? Seriously,” Rob says in the trailer above, while David Bowie’s “Modern Love” plays (not to be confused with Amazon’s Modern Love). “So I’m gonna ask them: My top-five, all-time, desert island heartbreaks.” From there, Rob re-connects with her former flames and flings — no wonder High Fidelity premieres on Valentine’s Day. You can watch the trailer above, then check out the teasers for Hulu’s other upcoming series, including…

Normal People, from the writer of the Oscar-nominated The Favourite.

Does Nicholas Hoult throw a parachute-wearing dog off a balcony? Yes, yes he does.